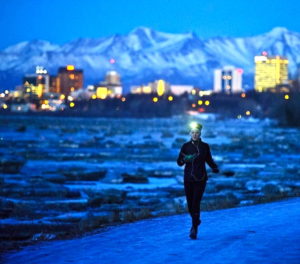 My life journey with cystic fibrosis (CF) began over 25 years ago, when I was diagnosed with the double F508del mutation at the age of four years. I am one-quarter Tlingit Indian (Alaska Native) and live in Anchorage, Alaska. Because CF is not usually found among Native American/Alaska Native people, it took a lot of time before a sweat test was suggested.

My running journey started when I was 12 years old. My mother wisely believed that running could be used as a form of airway clearance. She would take me to a local track in Anchorage and set a goal for me to run 10 minutes straight. She always ran with me. We learned that running helped me to loosen the thick mucus from my lungs and cough it out.

When I was 18 years old, doctors found a cancerous tumor on my spine, and I was diagnosed with non-Hodgkin’s lymphoma. This was a brutal time. The chemotherapy and radiation treatments made it difficult to continue my running routine and I eventually had to stop altogether.

My running revival came in 2010 after being in remission for five years. I wanted to become more proactive in regards to my cystic fibrosis and my overall health. Once I started running again, I realized how much mucus I was bringing up and how clear my lungs were feeling after each run. I started out by setting goals like running a 5k race. After I accomplished that, my new goal was a 10k, then a half marathon, then a 16-mile mountain run, then a full marathon!

My lung function will sometimes drop and indicate that I need antibiotics or hospitalizations, but that always reminds me how important running is in my life and to my health.

My main motivation for running has been to outrun cystic fibrosis and to prevent further lung deterioration. I am determined to run and exercise for my health. I now have a wonderful son, Leo, and It’s not just about me anymore. I have a child who needs me; I want Leo to grow up with his mom.

Leo is my inspiration to lace up my shoes and get out there and run. There are no excuses today, tomorrow or the next day; just reasons why I need to put one foot in front of the other and run.